What Really Makes Us Fat? (It’s not what you think!) 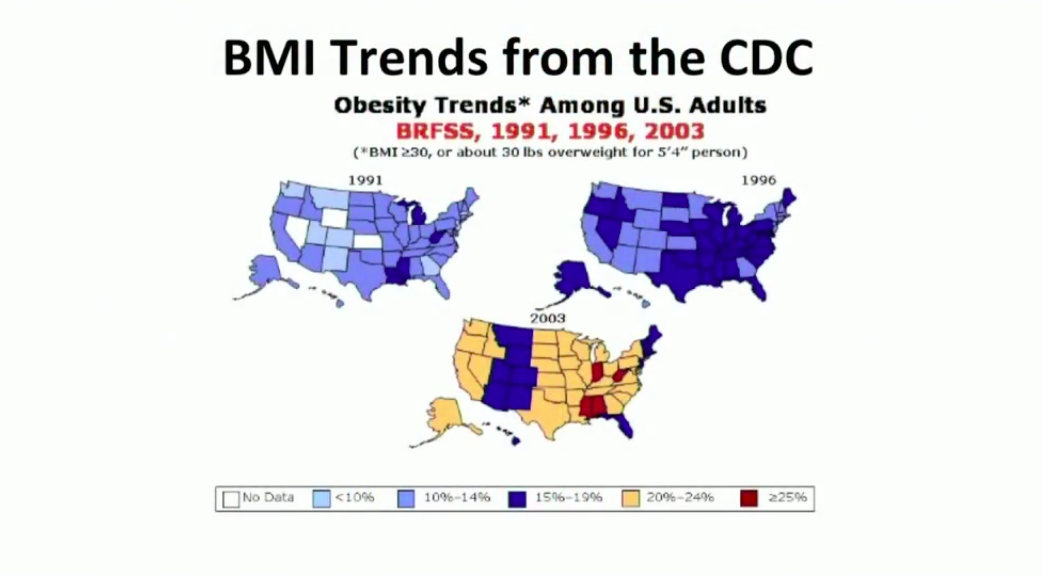 Basically, they’re maps of how fat Americans are. These colour-coded maps show the percentage of people in the state that are over a certain weight. In 1991, we were doing okay. We had some pudgy states but no state was out of control. By 1996, it’s like a competition started. By 2003, they had to add new colours to show how fat people were getting!

I work at an unbelievably cool lab with guys who know space-age econometrics and such. We’ve been trying to figure out what would happen if the same trend in obesity continued for the next few years. What would the map look like in 2025? 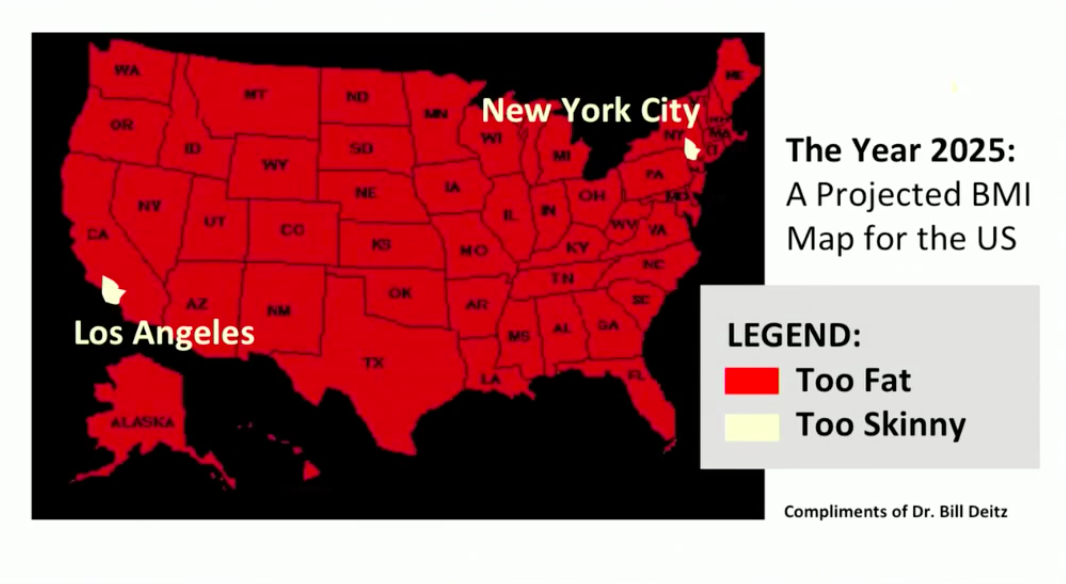 We joke about American weight gain but the same is true here in Australia — two of every three Australians are overweight or obese.

And, while the issue of obesity is interesting to many of us, it represent a much larger issue — how can changes in behaviour lead to lasting results?

This is especially important to those of us in human resources and organisational development. Can’t we all identify certain shifts in behaviour that would make our employees more productive? More dependable? More likeable?

For us, it comes down to the issue of influence. If we can influence others (and ourselves) to make positive changes in behaviour — whether it’s losing weight, meeting deadlines at work, following safety procedures — we can truly make the world a better place, right?

So, back to our fascinating study on obesity. We asked the question, “Why are we struggling with our weight?”

Here’s one theory that drives this thinking:

Now that makes good sense. It lets people complain and point fingers, but if you eat at buffets, you know not everyone there is fat. In fact, about half the people there are actually skinny.

What do skinny people do differently than heavy people at buffets? Maybe if we knew, there’d be some insight that we could use to stay healthy and skinny.

We figured the best way to figure out the answer to that question was to stare at people while they eat! So, we observed 423 diners at Chinese buffets in six different US states. As undercover diners, we pretended to eat while actually coding people based on 50 dimensions — how many people they were with, how many times they went back for more, how they ate, how they chewed… you get the idea. We even got measures of their BMI from mats we developed that told us their weight when they stepped on them.

What do you think differentiated the skinny people from the heavy people?

They probably ate less and ate better. Of course! But what else did they do differently?

To figure that out we considered the six sources of influence. Quadrant six is my favourite — it’s all about structural changes we can make without relying on motivation. You make the change once and you’re set. 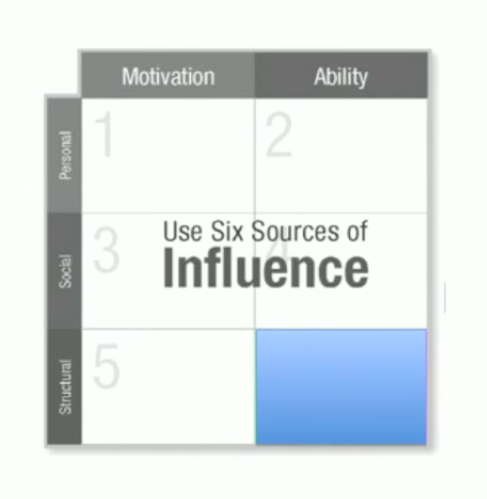 When we decided to take on the myth about buffets being the source of our weight gain, we saw specific structural sources that seem to make a big difference in the way skinny vs. heavy people operate at buffets.

Here’s what we found thin diners did: 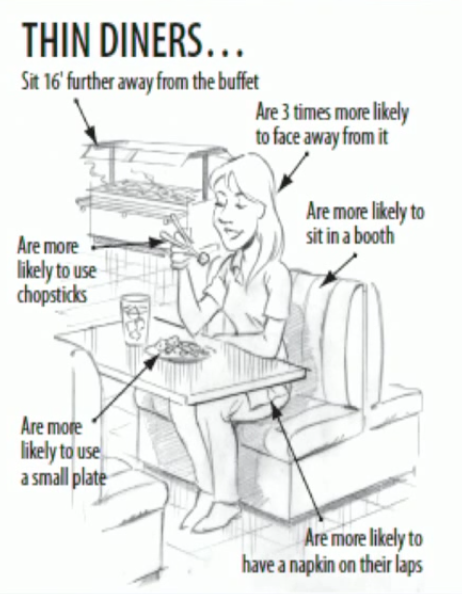 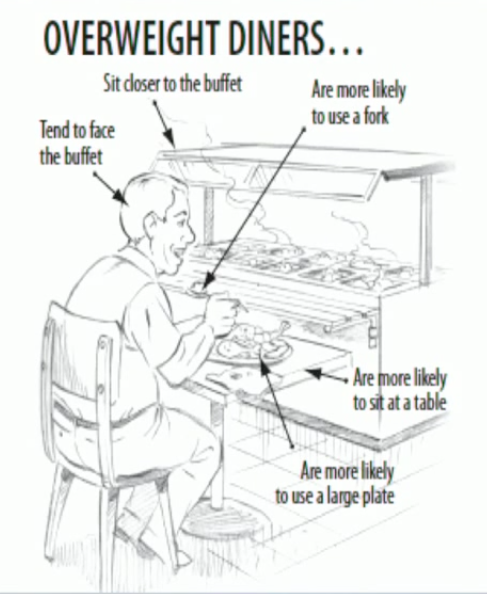 Maybe it’s a little exaggerated, but you can see the differences.

If you look at these factors, you may assume that these differences are more correlational than causal. (But even if they are, it’s a good way to bet — if you want to be a skinny person, act like one.)

But one more part of the study led us to believe these patterns are more than coincidence.

Almost everyone answered the same: “I did?!”

Most people had no clue why they were doing what they did. It had become habit over time.

So how do we help people eat smarter at buffets?

One solution is to tell all diners: Sit far away and face away from the buffet. Use smaller plates. Scout out the buffet first.

Another solution came from a restaurant owner. He owns multiple buffets in Central Pennsylvania. He wrote me a letter that said, “I own some buffets. And because of your research, I’m now saving money in food costs.”

Here’s what he did:

So I called this guy back to thank him for taking the time to write. He said, “Yes. I finally put all these measures in place but it took a long time.”

I asked, “Why? It seems like you could do most things overnight.”

Sure, most of us could stand to lose a little weight, but what simple changes could make a difference in other areas of our lives?

Is a seating arrangement at work creating tension?

Are people using ineffective tools for the jobs they’re asked to do?

Or is there just distracting clutter on your desk that derails your focus?

If you’re struggling with inefficiency or stuck in a dilemma you can’t seem to solve, look at the structural influences. Is there something you could change in your environment that would solve the problem?

Not all changes in our behaviour require us to shift our personal motivation or social support. Sometimes, we just need a plant to block our view of the food.

Four Steps To Influence A Behaviour Change In Your Organisation