How Your Ancestors Can Help You Become a Better Person

Emotions influence our actions. In Crucial Conversations®, we teach about the Path to Action — a mental model that helps us understand where our emotions come from. The things we see and hear lead us to build a story about what’s going on around us. That story contributes to feelings. Then, those feelings fuel our actions.

During the times where you feel like punching someone in the face or slashing their tyres, Path to Action is especially helpful. When we want to change our actions, we need to create new emotions.

See, new emotions that promote HEALTHY ACTIONS create better outcomes for our relationships and in turn, our performance.

Just as seasons change throughout the year, seasons change in our lives. And let’s be honest, not all of our seasons are great. People upset us. We feel disappointed, betrayed, depressed, or lonely. When we’re about to give into the tough times, we can use Path to Action to create new emotions that help us push beyond our self-defeating behaviours.

During these difficulties, stop and examine your Path to Action. Separate fact from story and determine, “What is my story now and do I need to create a new story that promotes healthier emotions and actions?”

But don’t limit the way you think about Path to Action. We usually talk about the Path to Action in a micro sense, like one particular moment of confrontation at work or a difficult phase of our individual life. It’s like you’re living in the moment we’ve highlighted in red. 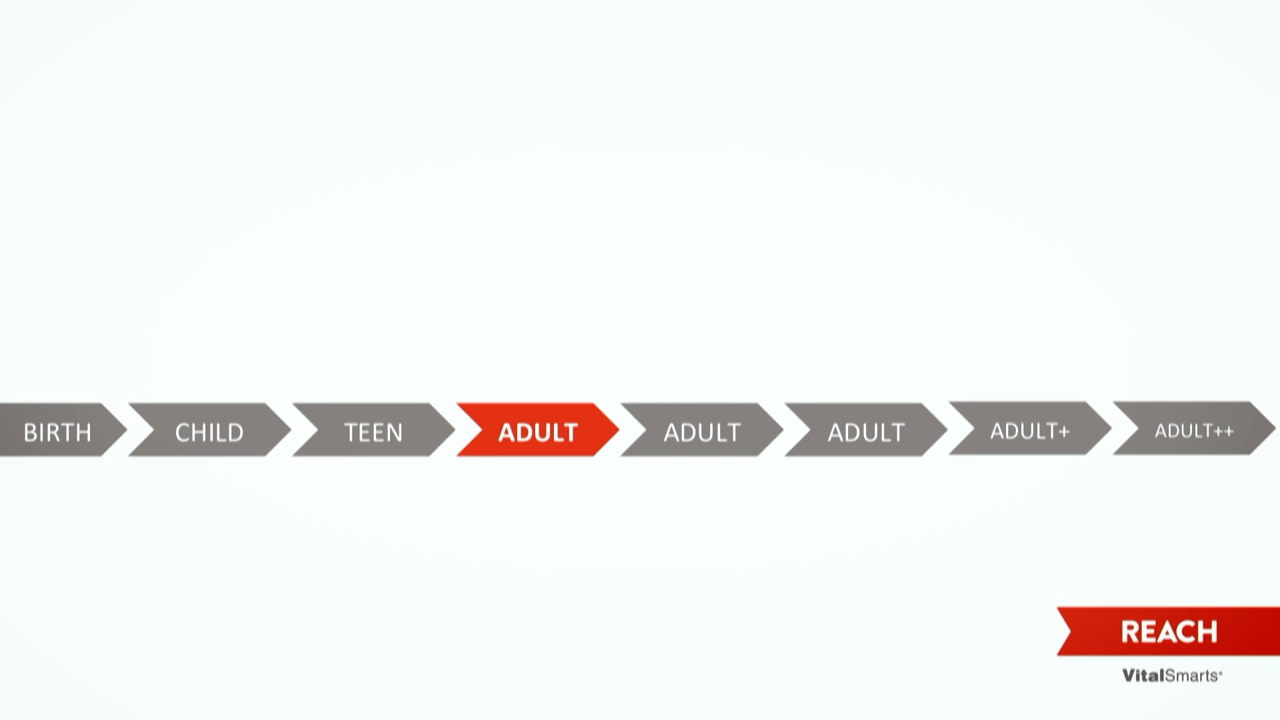 But there’s a lot of research that shows that reexamining our path to create new emotions can happen in a macro sense as well. 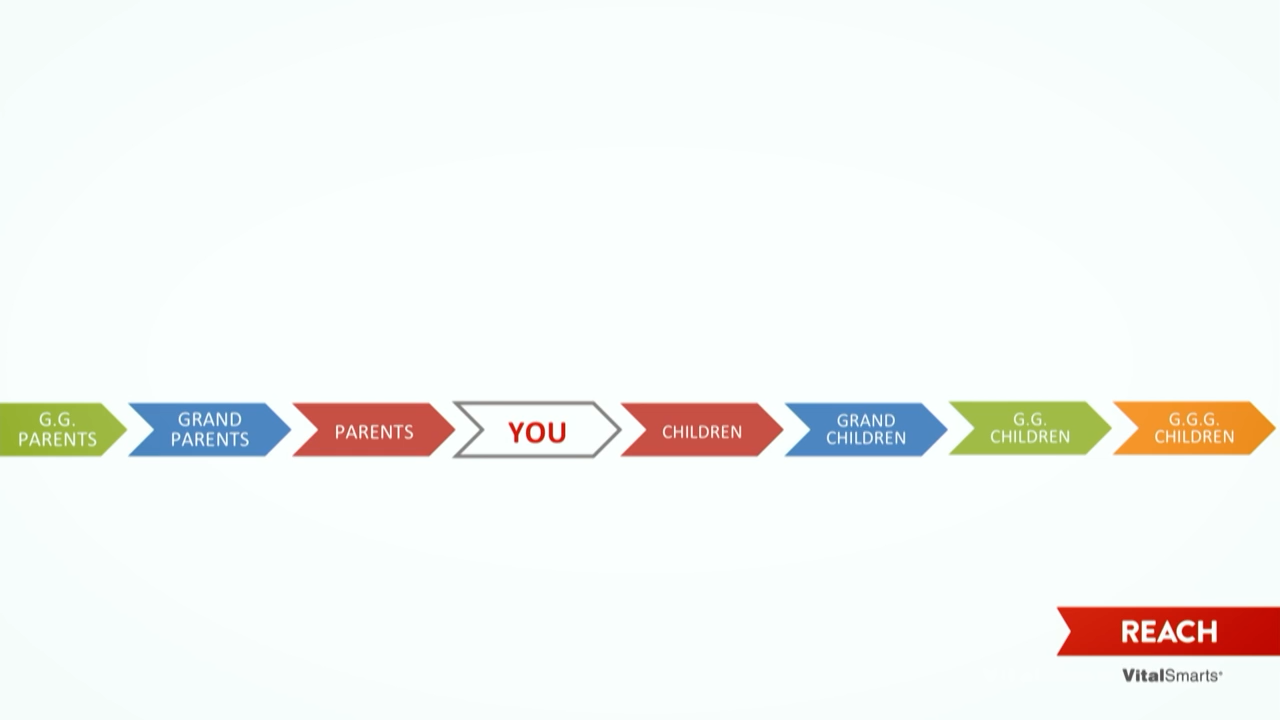 Think of your timeline on a grander scale of those who have come before you and those who will come after you. And when you let that bigger story help you change your emotions, you experience the ancestor effect.

Considering the bigger picture of your life can change your Path to Action. The Ancestor Effect — immersing yourself in the story of your ancestors — can be powerful in helping you create new emotions in tough seasons of your life.

I know the Ancestor Effect is powerful because I’ve experienced it.

I’m a young, African-American male. My grandfather’s parents were pioneers who moved across the country to settle in the American West. They began their new lives southern Nevada. 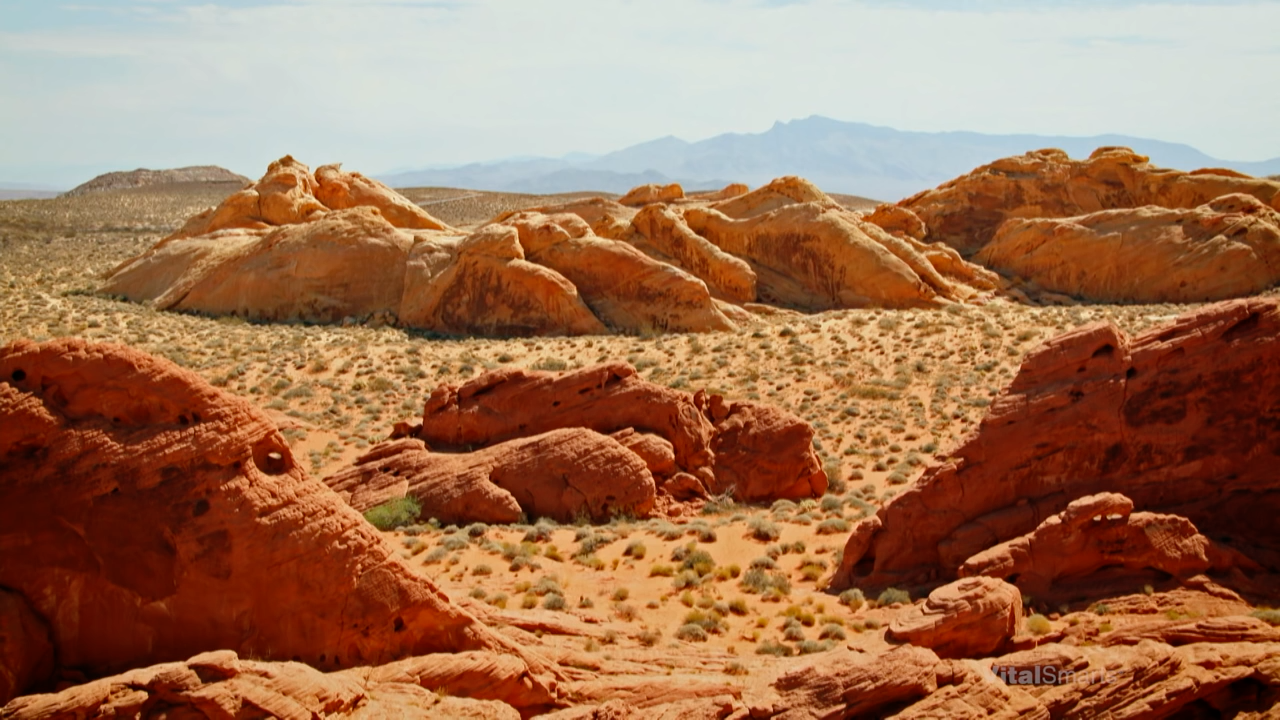 But soon after they arrived, when my grandfather was two, his father died. So, his mother raised him and his three brothers in extreme poverty. For years, they actually lived in my uncle’s fenced in back porch. They had nothing.

From those circumstances, it seemed he wouldn’t make much of himself. Yet, when World War II began, he enlisted in the Air Force and became a B17 bomber. As a prodigious pilot, he rose to the rank of major and flew in the 447th bomber group. In this group, if you survived over 30 missions, you became a member of the “Lucky Bastard’s Club.” Yep, he’s officially a lucky bastard. 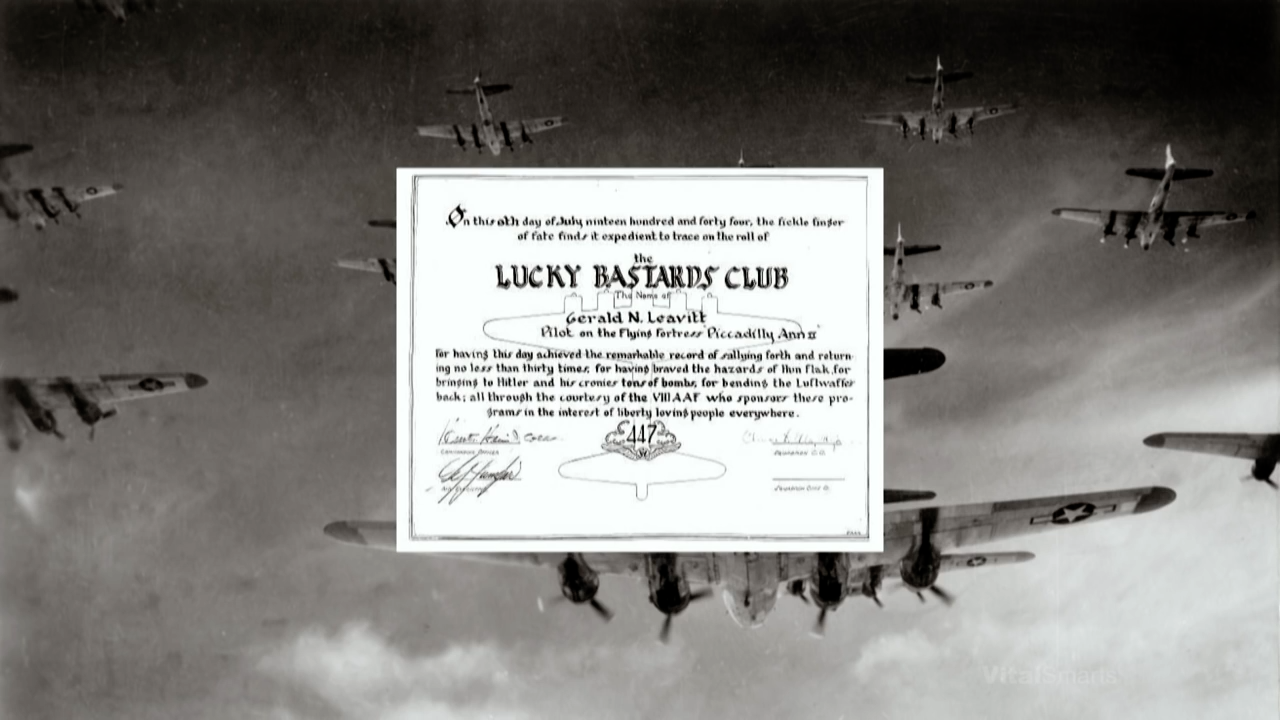 But before his success in the Air Force, he wasn’t so lucky. He’d not only experienced a hard life, he’d dealt with severe tragedy. He married before the war, but his wife died in a horrific fire caused from an explosion at her family’s propane business. The fire killed her and her entire family. And as my grandfather identified her body at the hospital, he removed her wedding ring and kept it to honour her memory. (We still have that ring in our family today.)

Consider his hurt and despair after losing his young wife. Yet, he moved on with life. He joined the Air Force, met my grandmother, fell in love, and started a family.

Later, when Kentucky Fried Chicken started, he bought in early as a franchise owner. Then, he became a successful real estate developer in the greater Las Vegas area. Ever flown through McCarran airport? He owned and sold all that land. Our family home used to be right around the D terminal.

My grandfather started with nothing but lived an example for his descendants of perseverance in the face of hardship. As I face difficulties, I have a model of someone who didn’t succumb to despair and succeeded in spite of it.

How the Ancestor Effect Changes Your Story

There are people all around us struggling through tough times. And if you find yourself battling loneliness, anxiety, or disappointment, the ancestor effect can help you. If you’re willing to reexamine the story of where you come from, you can create new emotions and promote healthy actions in hard seasons of life.

We do this by creating three emotions: nostalgia, confidence, and gratitude. And when we plug these into the Path to Action, you’ll see the benefits it can provide.

As you look back at the facts of your ancestry, you may start to admire them. That admiration feeds nostalgia — a feeling of well-being that you’re a part of greater whole. So, maybe you become calmer, more pensive, and more patient during the times you’re tempted to make a rash decision.

An attitude of thanks can be a propelling factor in the choices you make. By researching your past, you’ll value the price that’s been paid by those who come before you. And the emotion of gratitude is tied to your capacity of having more willpower of making a more determined choice.

How The Ancestor Effect Is Changing My Story

We’ve made a presupposition that your past is good, but that’s not always the case. Take a look at this picture of me and my lovely mother. 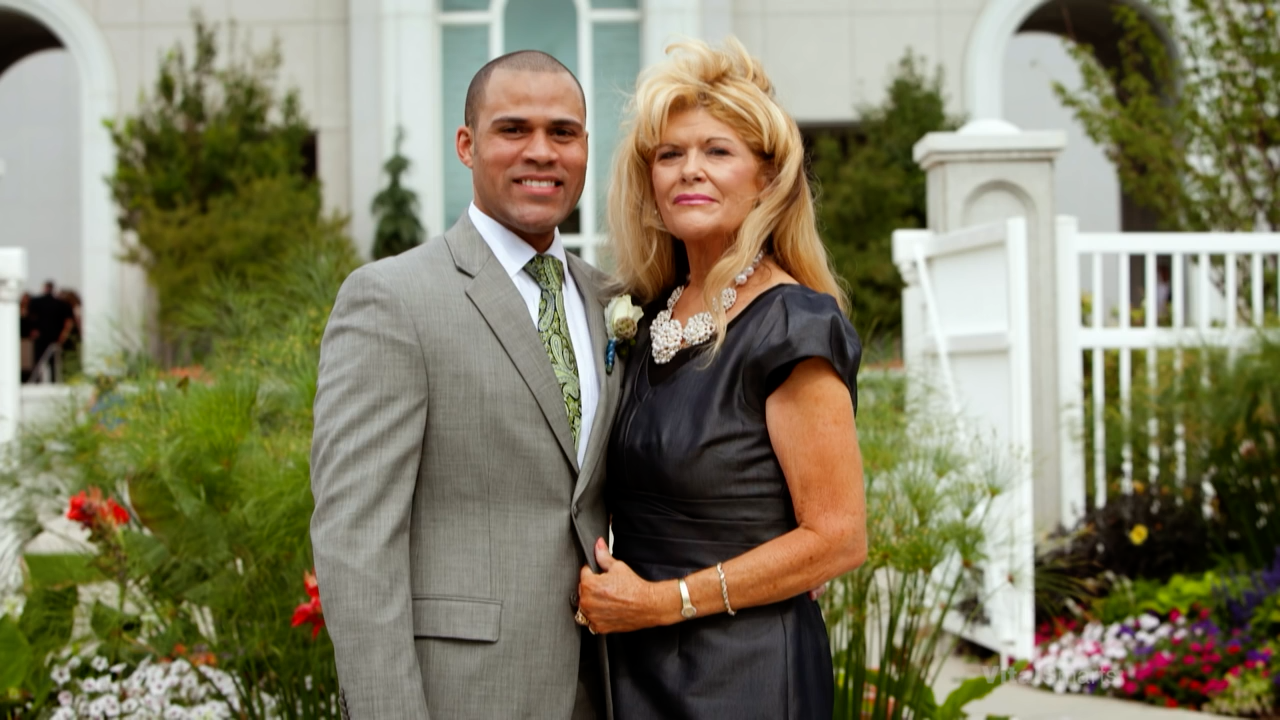 My mother has given me many wonderful things. But one of the greatest gifts she’s given me is the capacity to tell a new story in the midst of a negative past. I grew up without a father. If you look at the statistics of an African-American male from a single-parent home, the outcomes aren’t hopeful. But my mother has been a paramount example of looking at the positive story that can emerge from a negative past.

My grandfather taught me where I came from. And my mother helped me look at the positive attributes of my father even though he wasn’t around. She helped me develop a new story in spite of the harsh stats.

So, if your past isn’t great, tell yourself a new story: “I want to be the person who starts new. I’m going to be the one who writes a new story for the future.” This new story gives hope. You can be a pioneer to a new path. Life can change on your watch.

For me, I’m placing hope in the new story I’m writing for my son. 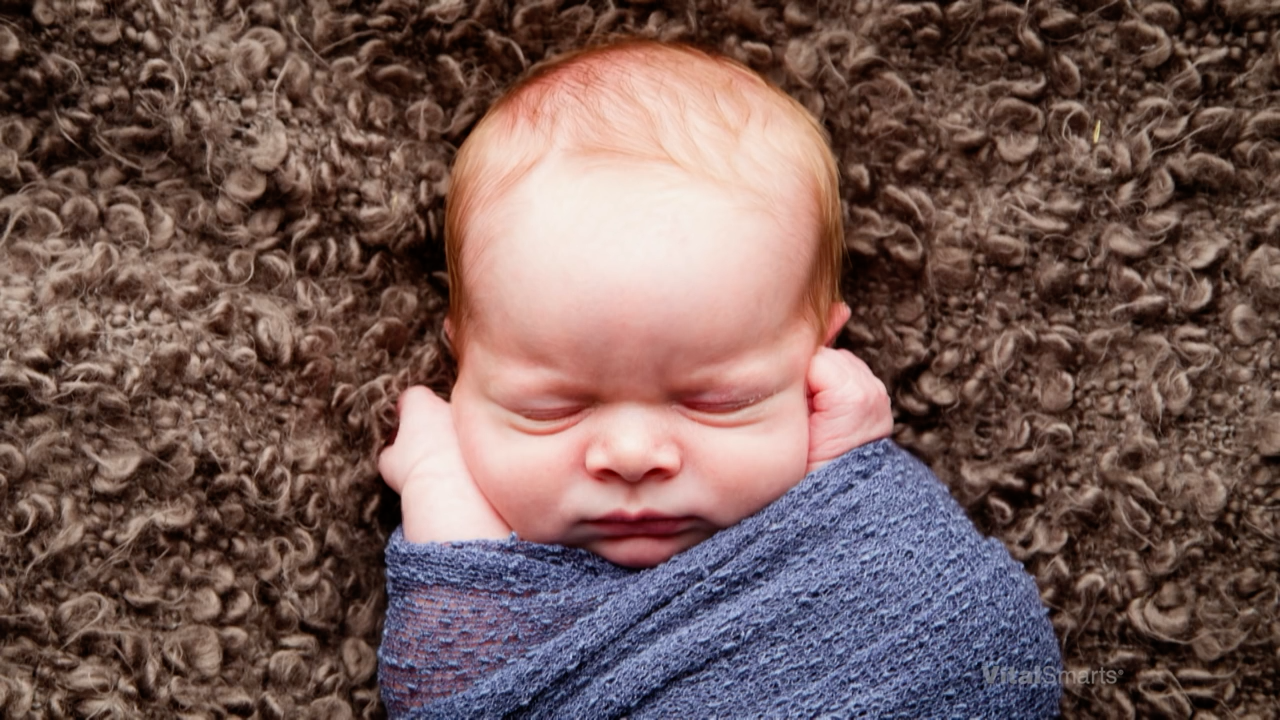 Meet Truman. I love this little man to no end. I realise that the choices I make today contribute to his emotional intelligence for tough moments later in his life.

Does the story of your past provide you powerful new emotions for the moments you find yourself struggling? Or is it too painful to look at your past and you’re ready to look to the future? Are you willing to put your hope in the story you’re writing now?

So, what’s your story? Consider the power of writing a new one today.

Why Our Model For Changing Behaviour Just Isn’t Enough